Today we have added the Cockburnspath Patrol to the site as well as others listed below.

This report was a real team effort with members of the public working alongside our experienced researchers to delivery the report.

The following patrol reports have also been added to the site.

Thanks to Nina Hannaford, Stephen Lewins, Bill Ashby, James Towill, Simon Walton and David Blair for their hard work getting this info out there for you to read.

If you can add anything to these reports please do contact us. We have added a basic patrol report for Clapham Patrol in Sussex.

We have also updated the Warningcamp Patrol report with a site video and images. We have now added a page about Captain John Nevile Gwynne, Sussex’s first Intelligence Officer, to the site. We have now added a new patrol report by our Sussex CIO Stewart Angell on the West Stoke Patrol. The report contains a very rare image of an Observation Post (OP) and can be seen here

We have also added a new patrol report in Somerset by Nina Hannaford, CIO for Devon, on Admiralty 2 Patrol at Langridge. This can be seen here Today we have added a patrol report on the Abbot’s Wood Patrol by our Sussex CIO Stewart Angell.

Whilst many patrols had these small manned posts, finding one to photograph is very rare.

We have just added some third party videos of various Operational Bunkers in Sussex to our website. These were supplied to us by a third party care of YouTube. Bill Ashby has kindly donated these images of his father Lieutenant W. Ashby digging a Operational base somewhere in Sussex. 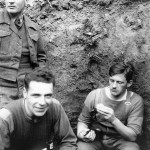 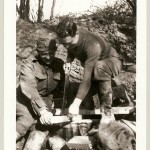 As far as CART knows, these are the only known pictures of an OB being built.